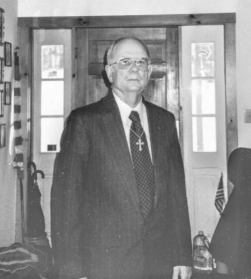 Dedication Ken was born February 3, 1941, here in Goshen. In the original family home, just up the road, on the left, from the Goshen Town Cemetery. His parents were Raymond and Dorothy (Noble) Brown, and he is the middle sibling of their children. Ken attended the one room school in town, more often then not, was the only one in his grade. He graduated Brandon High School in 1959, working the last two years, after school, for Joe Baker in the Grand Union. After graduation Ken worked in the logging business with his father and brother, Bud. Ken also worked for CVPS in the survey department. In 1962, Ken married Barbara (Johnson) Brown of Leicester. He’s the proud dad of Scott, Erica and Ara (Brown) Lefrancois. In 1968 Ken decided it was time to go to college. He graduated UVM with a degree in Mechanical Engineering in 1972. After 28 years of service repair for Xerox Corp, Ken retired from that job. But as you can see, if you look around town, ‘”Ken’s Still Logging.”