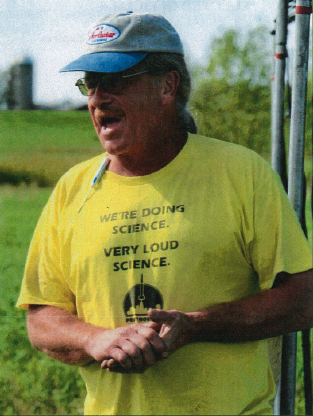 Kevin was born in St. Johnsbury, VT; and lived in Danville where he attended grade school and started to find his love of music by playing the trumpet. His family moved to Rutland in 1968, in which he attended Rutland  High. At 17 he became an Air Traffic Controller in the United States Air Force, where he served both stateside and inter­nationally. Upon completion of his
service, Kevin then went to work at Brandon Training School, where he met
his wife Diane, where they worked together until the closure of the school in 1992. After which, Kevin then attended Goddard College where he received a Masters in Psychology, and continued his devotion to work in the mental health field by establishing The Nurturing Program in  utland, a program that helped parents deal with children with disabilities.

Kevin and Diane moved to Goshen in 1990 with their daughter Sheea, and had a son, Elyas, in 1995. Kevin became increasingly involved in the community, volunteering at the recycling center and helping to build the town barn. He then continued on to serve the Town of Goshen as Treasurer, Planning Commission 1nember, Town Moderator, and Selectman. Members of the town often regard Kevin as very fair, easy to approach, and an open book type of person. He had devoted himself to his career, and to the town, helping to change the future of the town. He wanted to help build a strong community, helping to host events such as the town pot lucks and also an annual fireworks show. Kevin saw and experienced things that not many others would, such as the vast caves in Kentucky and West Virginia, and brought that knowledge to Vermont where he began a group of Cave Rescue workers, the first that had ever been seen in Vermont. Along with this, Kevin had a passion for music, high powered rocketry, and building his own fireworks. Kevin will be missed greatly by all those whole lives he touched and will be remembered forever.